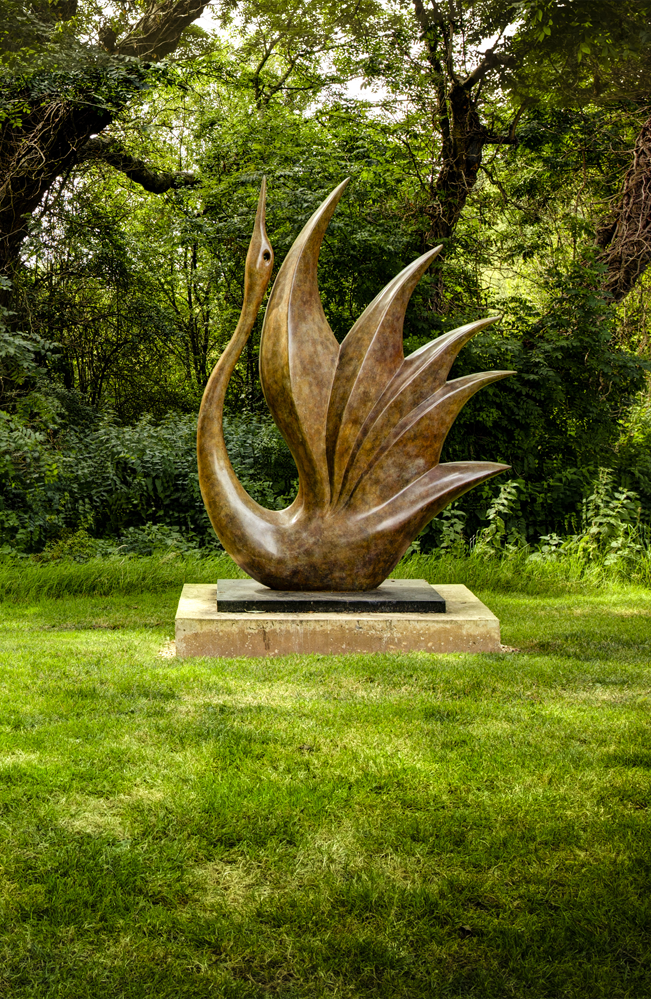 “Inspiration for this sculpture came from the crane, otherwise known as the ‘Bird of Happiness’, as well as the Strelitzia, a South African flower, also known as the crane flower. Cranes have appeared in art and mythology for millennia. In the Egyptian Museum in Cairo there is a beautiful limestone relief showing these birds dating back to 2660 – 2590 BC. They are regularly depicted in tombs and temples including those in the ancient city of Luxor.

In ancient Greece they drew inspiration from the flight form of the crane for several letters in their alphabet. They are also often depicted on vases and bowls dating back to the fifth century BC. Cranes accompanied the gods Apollo and Hermes that stood at the side of Eros, the god of love. They are also associated with Hephaestus, the Greek god of sculptors.

However it is in China that the crane has been consistently adopted over the millennia as a symbol of good, to signify liberation from earthly constraints, as symbols of the unshakable unity of two people, and everlasting happiness. A treatise dating back to the sixth century BC equates the crane with the philosophical concept of yang, which represents light and happiness. In Taoism it is the ‘immortal crane’. Buddhism views the crane as the godly bird. Both look on the crane as the arbiter between ‘now’ and the ‘hereafter’ thus making it a symbol of immortality. “May your life be as long and happy as that of a crane” is a common birthday toast in China, Japan and Korea. China’s First Emperor had thirteen large cranes in his artefact chamber dating from 22 BC; they were there to accompany him to the afterlife.

In the Confucian Book of Songs from the third century BC it is written:- ‘When a crane, standing by a pond, cries out, its voice reaches heaven’. In Japanese Buddhism the ‘honourable Lord Crane’ (O tsuru sama) is a guarantor of longevity and happiness, he is a constant companion of Fukurokuju, one of the seven gods of fortune. The crane is also known as the ‘bird of happiness’ in Japan.”